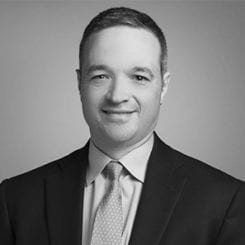 Mr. Del Guercio is the Chief Executive Officer and President of Clark Enterprises. He joined Clark Enterprises’ CNF Investments in 2004 as a Managing Director.  Prior to joining CNF, he was a director with LPL Financial Services, a Boston- and San Diego-based independent broker dealer, with responsibility for strategic planning, new product development and acquisitions. Mr. Del Guercio started his career as an investment banker with Goldman Sachs and Robertson Stephens, where he focused on mergers and acquisitions, private and public equity financings and restructuring.

He serves on the boards of American Honors College, Placecast, Terrago Technologies and Verax Biomedical, and is also an advisory board member on a number of CNF’s fund investments.

Mr. Del Guercio holds a MBA from Harvard Business School and a Bachelor’s degree from Boston College.  An avid supporter of after-school sports programs, he serves on the Investment and Grants Committees for the U.S. Soccer Foundation and is actively involved with the National Youth Baseball Academy and Cycle for Survival.