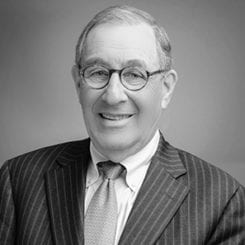 Mr. Nussdorf serves as Director of Leidos, Inc. (NYSE:LDOS) (formerly SAIC, Inc.). He is a member of the Executive Committee of the Anti-Defamation League (DC Chapter), a Trustee of WETA and the United Jewish Endowment Fund of Greater Washington, a Director of the A. James & Alice B. Clark Foundation, a member of the Board of Directors of DC Prep, and a founding member of the Advisory Board of the Penn Institute for Urban Research. He previously served on the Boards of Clark Construction Group, LLC; Pepco Holdings, Inc. (NYSE:POM); Capital Source, Inc. (NYSE:CSE); as well as numerous DC-area nonprofits, and is a former Trustee of the University of Pennsylvania.

Mr. Nussdorf is a member of the District of Columbia Bar Association and is also a Certified Public Accountant (inactive status). He received his BS in Economics from the Wharton School of the University of Pennsylvania, his JD from Rutgers School of Law, and an LLM (Tax) from Georgetown University Law Center. Mr. Nussdorf is the recipient of the Alumni Award of Merit from the University of Pennsylvania and the Outstanding Director Award from the National Association of Corporate Directors.